We've added the ability to lock templates to prevent any updates.

The "Lock" and "Unlock" options can be found in the "…" menu on the Templates page.

We are planning to add support for template versions in the future. In the meantime, you can use template locks and duplication to create a versioning workflow:

You could also create a folder for each template to hold all of the different versions.

View the documentation for Locked Templates.

We've written some new documentation that shows how you can set up Radio Button logic for a group of checkboxes, so that only one checkbox can be checked at a time:

You can create a radio button group with a String field that has multiple Field Options. Then you can create multiple checkbox fields with "Equals" conditions, so that a check mark is only shown when the field is a certain value. Radio buttons are just one of the things you can set up using these features. Note that you are not limited to "radio button" logic. You could also check multiple checkboxes for a single value, or set up advanced logic using regular expression conditions.

You can now use DocSpring's "Comb Cells" and "Comb Offset" options to fill out these comb fields that are divided into multiple sections.

We've just added a new API Request Logs page, which should make it much easier to debug any problems with your API integration.

If you ever run into any problems with API authentication, you can now check the API request logs to see what went wrong:

We only record some general information about the API request by default. This includes the method (POST, GET), path, time, IP address, and response code.

If you want to log more information about your API requests, we have also added a new Log API requests and responses option to the Account Settings page. This option is unchecked by default.

You can enable this option to record the headers and request/response body in your API request logs: 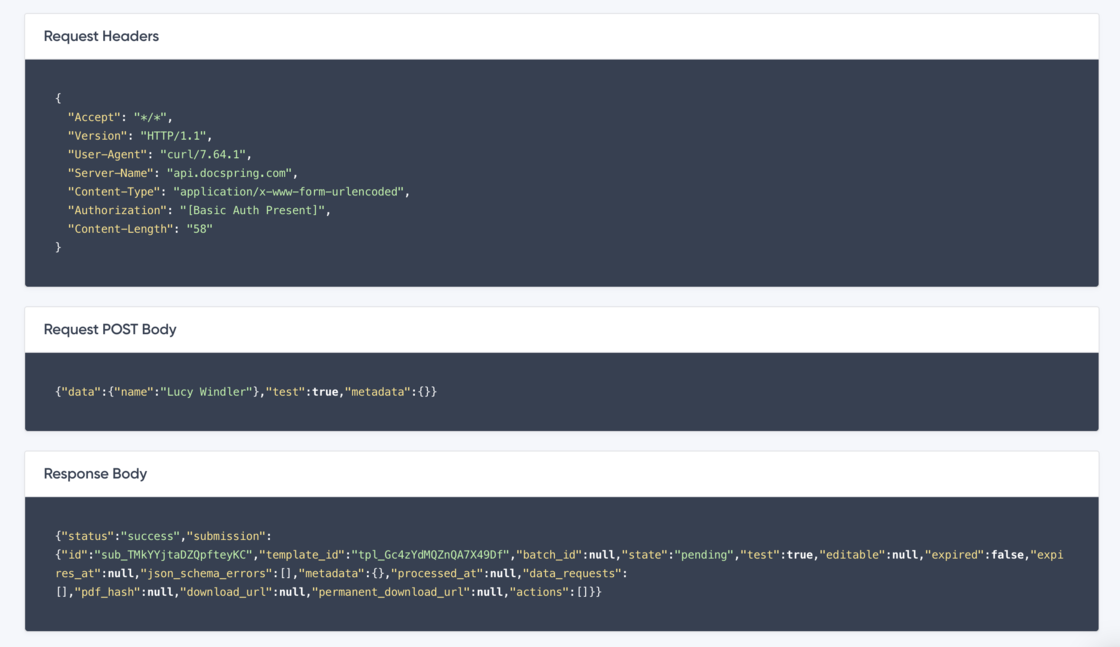 All API request logs are deleted after 7 days. You can also click the "Delete All Logs" button at any time to delete all your request logs.

Previous versions of DocSpring included a default inactivity timeout of 1 hour. We included this timeout because many PDF templates and submissions can contain sensitive customer information.

Many people found the 1 hour timeout to be very annoying, so the default inactivity timeout has now been changed to 30 days. You can now configure this option in your Account Settings:

We still recommend that you set your Inactivity Duration to 1 hour (or less) if you are sending us any sensitive information.

Thanks for using DocSpring, and please let us know if you have any feedback or questions!

DocSpring Has a New Design!

Welcome to the new DocSpring web interface! Check out some screenshots below: 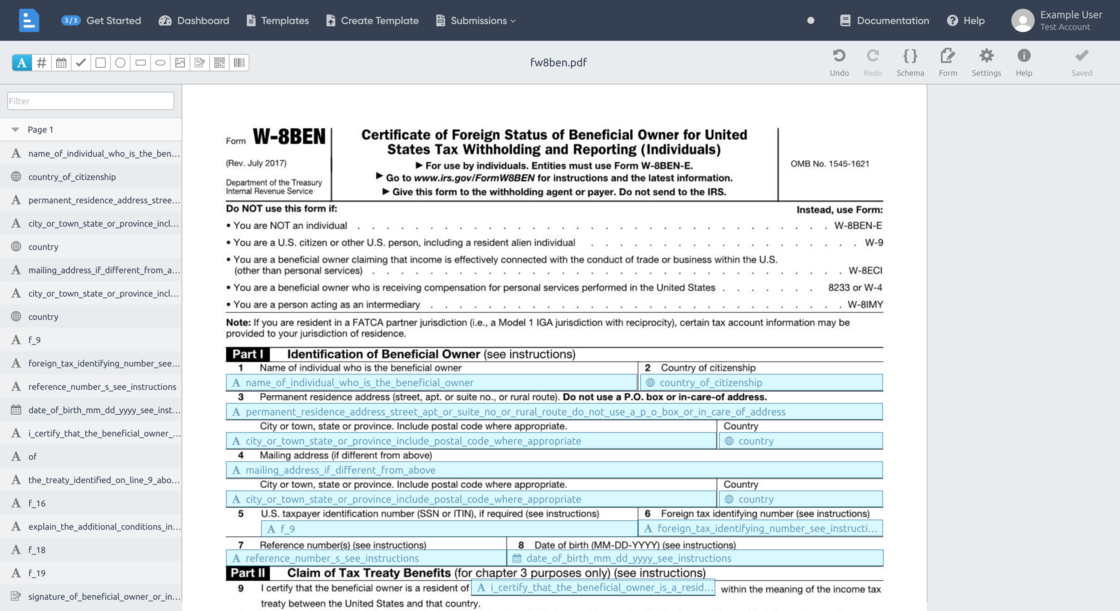 Our new UI is built with the amazing Tabler.io UI framework. Tabler extends Bootstrap 4 with many high quality components and layouts. I really enjoyed working with Tabler, and I would highly recommend it! This new design foundation will make it much easier for me to continue improving the interface and adding more features.

I hope you enjoy using the new DocSpring interface, and please let me know if you have any feedback!

DocSpring has an integration with AWS S3. If you set up this integration, we can automatically upload any generated PDFs directly into your own S3 bucket.

In previous versions, the AWS S3 integration would only upload PDFs for live submissions, and we would ignore any test PDFs.

It is now possible to upload test PDFs to your S3 bucket. You can choose one of the following options when setting up your integration:

You can set up multiple AWS integrations if you would like to use different S3 buckets for test and live submissions.

If you are already using the AWS S3 integration, your integration has been set to "Only Live Submissions". Your integration will continue to function the same way as before unless you change the "Submission Type" setting.

Thanks for using DocSpring! Please let us know if you have any feature or integration requests: support@docspring.com

We have added a new "Encrypt PDFs with a Password" option to the template settings. If you check this checkbox and set a password, DocSpring will encrypt your generated PDFs. Encrypted PDFs can only be viewed if you enter this password.

We will start sending notification emails once your account has used 75% and 100% of your monthly PDF quota. (These are optional, and you can unsubscribe from any of these emails if you don't find them helpful.)

Hopefully these notifications will help you keep an eye on your PDF usage and avoid any surprises on your next invoice!

Please Note: We will continue to support the FormAPI.io domain forever, so you don't need to make any changes to your integration. We haven't changed anything else in the web application or API. 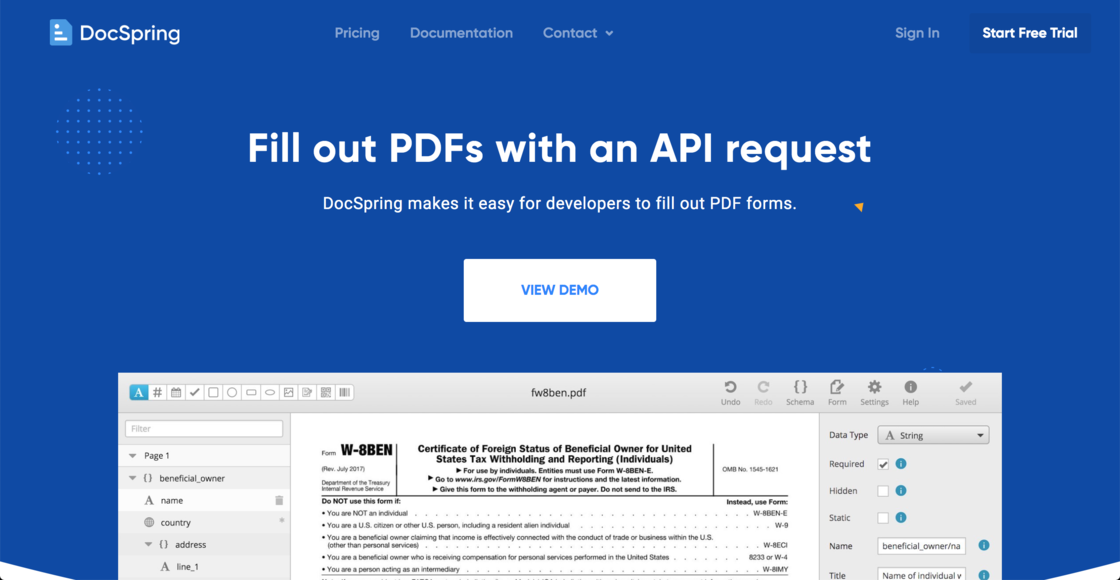 Here are some of the main reasons for our rebranding:

After installing the new API client library, you will just need to rename FormAPI to DocSpring in your code, but everything else should be the same.

If you are using our Data Requests feature, then you can continue to use the cdn.formapi.io URLs for our embedded JavaScript libraries. However, any new versions will be released on cdn.docspring.com. See our documentation for the updated URLs:

Thanks to all of our customers who have supported us since we launched FormAPI! We are also working on a redesign for the rest of the web application, so look out for more updates and improvements in the future.

Please let us know if you have any questions or feedback!

Bubble.io is a powerful tool that allows you to build web applications with no code. We've just released an official FormAPI plugin for Bubble.

You can find the FormAPI plugin by searching for "FormAPI - PDF Filler and Generator".

If you're having any issues with the Bubble plugin, or you need to use an API endpoint that we don't support yet, then please send us an email at bubble@formapi.io.

Special thanks to Copilot who built the original PDF Filler plugin for FormAPI.